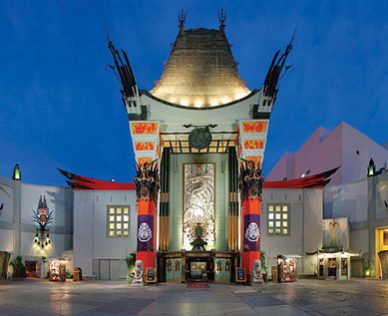 The IMAX auditorium seats upwards of 900 people and is magnificent, making it the world’s largest Imax auditorium.  Many movies still have their film premieres here, one of the most notable being the original Star Wars.

The Walk of Fame is always busy and bustling, and with LAX VIP Transport you can navigate the streets in a comfortable and relaxing ride.

Pick up and drop off service:

More affordable of the two options, your driver will take you to the TCL Chinese Theatre and return to pick you up at a pre-arranged pick up time.  We know sometimes events at the TCL Chinese Theatre run longer than anticipated, and we make sure that you have the driver’s contact information to adjust any pick up times.  (This can also be done through the main dispatch number at 8885294241).  Please not that hourly wait time fees may apply.

For pickups from the TCL Chinese Theatre, the best location is to pick up right in front of the theatre.  The driver will pull right up to the curb and you will be on your way in no time.

For those that want to have the convenience of having the driver wait on location, we also offer hourly wait time service.  This way the driver will wait on location for the duration of the event, and client can be as early or as late as they wish.  No need to notify the driver or dispatch about event running late.